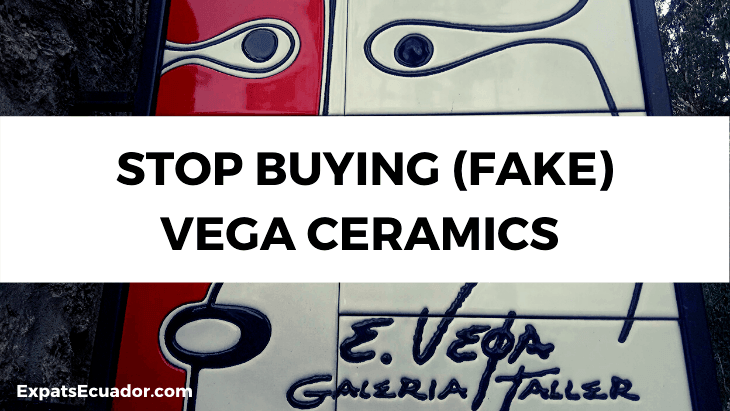 Eduardo Vega is an iconic Cuenca artist renowned across Ecuador and Latin America. He is responsible for the distinctly styled ceramics and murals you've most likely seen in museums, galleries and souvenir shops.

Visiting his workshop and gallery is one our favorite Cuenca activities for new visitors as it's located at one of the city's most popular view points, Turi. You'll pass the entrance to his workshop (and house) just before you reach the Turi lookout. Be sure to be looking on the right.

Entrance to the Vega Gallery and Workship in Turi, Cuenca

Eduardo and his son, Juan Guillermo, are the creative forces behind their authentic line of ceramics and murals. However, their popularity has meant they are under pressure from copycat artisans, and increasingly, big business.

There are plenty of copycat Vega artisans around and you can often find imitations for sale at various markets across major cities.

Authentic Vega ceramics are only distributed to a select few retailers. There is one in Cuenca and three in Quito.

I'm going to make a distinction between fake and unlicensed Vega ceramics as I think the intent is quite different for the purpose of this article.

This applies to vendors and artisans using Vega's name that have no relationship with Eduardo Vega and are trying to pass off ceramics under his name. They are clearly illegally and immorally leveraging Eduardo's brand for their own financial gain.

This applies to vendors selling cheap Vega knock-offs at markets around Ecuador.

This category applies to companies that may have a current or previous relationship with Eduardo or Juan Guillermo, but may be selling products that fall outside of this relationship.

I may have fallen victim to acquiring a lookalike or unlicensed Vega ceramic when I opened a 12 month CD at one of Cuenca's most reputable cooperativas, JEP. As a thank you for opening the account, I was gifted a 'Vega' cup and saucer.

I was already a fan of Vega, so I walked away rather happy and excited with my bonus and it quickly became my favorite mug. That was, until my next visit to Vega's gallery...

Vega vs 'Vega by Artesa'

On my next visit I started asking the Vega gallery manager about my recently acquired mug and the penny dropped. I assumed Eduardo or Juan Guillermo Vega had done a deal with JEP and their company was being rewarded for what would have been a very considerable order. I was curious about the deal and was happy for Eduardo for securing it. After all, they are artisans and should be rewarded for their creativity.

I was informed that the Vega by Artesa mug I was gifted was not made by Eduardo or Juan Guillermo Vega.

Artesa was originally formed by Eduardo Vega and a business partner in the 1970's. Vega was the creative force behind the partnership and the popularity of his designs allowed the business to grow quickly.

However, creative differences ensued and eventually led to the partners going their separate ways in the late 1990's. Eduardo and Juan Guillermo left Artesa to open their gallery in Turi.

Artesa's licence to use Vega

At the centre of the dispute is the licence for Artesa to use the Vega brand. I was informed that the original agreement limited Artesa to reproduce only 7 of Vega's original designs.

Is it possible that the Vega by Artesa mug I was gifted was included as 1 of the 7 original designs in the original licensing agreement?

Sure, it is possible. However, after knowing the history and understanding that Eduardo Vega received nothing from the deal with JEP, I can no longer bring myself to use the mug. It leaves a bad taste in my mouth.

To be clear, I am not insinuating that Artesa is creating fakes or that JEP has knowingly done anything wrong. I don't know the full extent of the licensing agreement and it is entirely possible that Artesa is within their rights to make good money from the deal.

What is important to take away is that Eduardo has a very different view of the licensing deal and objects to his brand being used without proper consent.

The Vega by Artesa I received from JEP

How to tell the difference?

So, now you know that not all Vega ceramics are created equal and you have a choice to support Eduardo and Juan Guillermo. But, how do you know what is what? It's actually quite easy once you know what to look for.

The signature for Eduardo's ceramics is E Vega as shown below:

Juan Guillermo's design are easily distinguishable from his fathers by the signature:

The Vega by Artesa designs can be identified by the following signature:

Clearly, we know that buying a cheap Vega knock-off at a local market is not going to support the original artisans.

Even though I don't support it, I'm aware that there is demand at the cheaper end for tourists to stash their bags for friends and families back home that don't understand the difference between an authentic Vega and a knock-off.

If this is you, please consider supporting the original artists instead - the quality is much higher and you'll actually be giving a gift that is going to last longer and has a real history.

What isn't so clear is the relationship between the corporate friendly Vega by Artesa and the artists behind the brand, Eduardo and Juan Guillermo. This is especially so given the inevitable intricacies of the licensing agreement.

What I do know is that I will continue to buy my authentic Vega products direct from Eduardo and Juan Guillermo from their gallery in Turi.