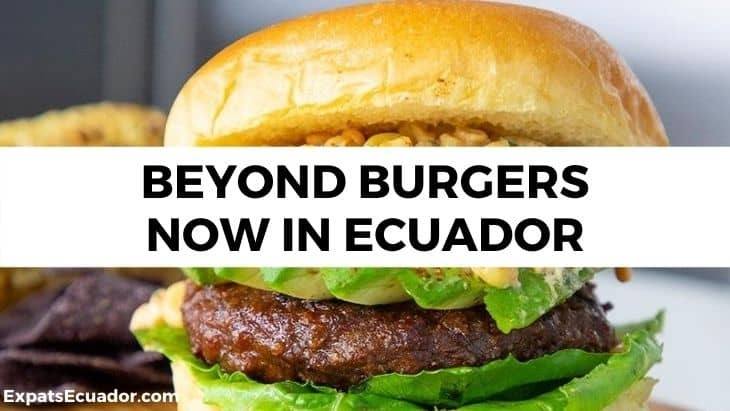 Beyond Meat now in Ecuador

Michelle and I were surprised and happy to find Beyond Meat in the freezer section of our local Ital Deli in Cuenca, Ecuador.

You see, we’d been wanting to try the next generation of meatless products for a while, but they’ve proven difficult to find outside of the US.

We’ll get to our quick review of the Beyond Burgers we barbecued last weekend in a minute. First, let’s bring you up to speed on the basics.

What is Beyond Meat

Beyond Meat is a US-based company that produces ‘fake meat’ that mimics the taste, texture, and look of traditional meat.

Their hope is that ‘by shifting from animal to plant-based meat, we can positively impact four growing global issues: human health, climate change, constraints on natural resources, and animal welfare.’ Source: Beyond Meat

Whilst some have issues with the amount of processing that is required to make the final product, my opinion is that the additional processing required is a small trade-off if we can shift the global food production away from the current mass-produced farming methods.

Beyond Meat vs Traditional Meat

I find it hard to argue with the following benefits of plant-based meat:

I’m sure the meat industry has their own thoughts on the rise of fake meats, but that is to be expected given their incumbent position and witnessing how the dairy industry has been shaken up with the adoption of non-dairy based milks such as almond and soy.

What products do Beyond Meat offer

Ground meat products were the first that both Impossible Foods and Beyond Meats have attempted because they were the easiest. This makes sense, as it would be much more difficult to replicate a steak than a sausage.

How much does a Beyond Burger cost?

It’s no surprise that given Ecuador’s import taxes that Beyond Burgers are kinda expensive. The two-pack cost us a bit over $8. At $4 for each burger, it’s clearly a luxury item that will struggle to find mainstream adoption in Ecuador.

But, in the US they do offer bulk packs of 10 burgers for $16. At $1.60 per burger, the price gap between a traditional and ‘fake’ hamburger is largely diminished. We’re hoping that these bulk packs will also be offered in Ecuador for a reasonable price too.

So, what ingredients are in a Beyond Burger?

This generation of fake meat goes well past the previous iterations that focused heavily on soy and shared a vague resemblance of the meat it was mimicking.

The main protein used by Beyond Burger comes from pea. They’ve traditionally relied on a small number of pea protein providers, which has proven to be risky to their supply chain. So, they now incorporate other protein sources such as mung beans, faba beans and brown rice.

The ‘bloody’ look comes from beet juice extract, and fats largely coming from coconut oil, cocoa butter and canola oil. The full list of non-GMO ingredients can be found here.

The ingredients are mixed and fed into a food extrusion machine that cooks it whilst being fed through a cooker that uses steam, pressure and water to form the meat-like texture.

With an abundance of vegetables and other ingredients similar to those in Beyond Meat’s products, Ecuador might seem like an ideal country to produce similar fake meat products. But, to my knowledge, there is no company trying to operate on the same scale in Ecuador.

Sure, you can get some Ecuadorian produced tofu, soy and chocho-based vegetarian products in Supermaxi, but nothing that resembles the sophistication of the newer generation of fake meats. I suspect the technological barrier of entry will make it difficult for Ecuador to compete with these specialized Silicon Valley fake meat companies.

We decided to barbecue our burgers because, well, we love barbecues. We enjoyed it with some corn (choclos), salad and provolone cheese on a grilled ciabatta roll.

I have to admit I was quite nervous trying my first Beyond Burger. I haven’t eaten red meat for over 20 years and really didn’t know what to expect. My biggest concern was that it would taste too much like meat and I’d hate the taste, or my body would actually reject it.

To me, it tasted a lot like the last decent beef burger I had when I was a teenager. It was pink, juicy and had a similar texture and bulk to beef. Visually, I would have absolutely no idea it wasn’t meat. It was all red, bloody, and a bit messy. They recommend being careful of over-cooking as the pink color doesn’t really change.

Michelle does eat meat, so she is the better judge. She shared a similar experience, saying it had an ‘80% meaty flavor and was very juicy, which is hard to find in fake meat. The ingredients worked in unison with the woody flavors of the barbeque to create a delicious burger that I’d have again.

The burger was on the generous size. Which you’d hope so for $4! It was a hearty, ‘meaty’ meal that left us both very satisfied.

Wouldn’t be a bbq without beer…

Our drink of choice for the day was a relatively new Ecuadorian beer called Siembra. The beer was a little hoppier than our usual Pilsner, which we both enjoyed. We also like the different business model employed by Siembra as it adopts more of a co-operative approach with their farmers.

We’ll certainly be enjoying more Beyond Burgers in the future. If they can manage to bring the price down to be competitive with the US, then I can see this becoming a regular meal in our household.

Our next challenge will be sneaking one of these patties onto the kids’ plates to see if they taste and sense any differences to traditional meat.

Have you tried Beyond Meats? Let us know what you think in the comments below. We’re especially interested in whether you see it as a replacement for beef.

After numerous years wandering the globe as a digital nomad, Jason now calls Ecuador home where he lives as part of a mixed Ecuadorian/Expat family. Jason created this blog to give back to the Ecuadorian expat community.

Please log in again. The login page will open in a new tab. After logging in you can close it and return to this page.